Matthew 13:1-9
1  On the same day Jesus went out of the house and sat by the sea.
2  And great multitudes were gathered together to Him, so that He got into a boat and sat; and the whole multitude stood on the shore.
3  Then He spoke many things to them in parables, saying: “Behold, a sower went out to sow.
4  And as he sowed, some seed fell by the wayside; and the birds came and devoured them.
5  Some fell on stony places, where they did not have much earth; and they immediately sprang up because they had no depth of earth.
6  But when the sun was up they were scorched, and because they had no root they withered away.
7  And some fell among thorns, and the thorns sprang up and choked them.
8  But others fell on good ground and yielded a crop: some a hundredfold, some sixty, some thirty.
9  He who has ears to hear, let him hear!”

This chapter is full of his teaching:

Verse 1 – “… on the same day Jesus went out of the house and sat by the sea….” The parable is told by Jesus after leaving a house and going out near the sea. The house spoken of here could possibly have been Peter’s house (Matt 17:24-26). The sea spoken of here is the Sea of Galilee. The city of Capernaum is located on the shore. The parable was the first of several in this setting, and he himself gave the interpretation of it, as we shall see.

Verse 2 – “… great multitudes… gathered together… He got into a boat… the whole multitude stood on the shore.” First, this was actually a good way to handle the press of a large crowd. Second, it also had the advantage of the sound carrying well over the water and to the upslope of people on the shore.

Verse 3 – “Then He spoke many things to them in parables, saying: “Behold, a sower went out to sow.” A parable is one thing compared to another, especially in spiritual things as compared to natural things. The use of parables was very common among the Rabbis (Hebrew teachers). Rabbis were known for speaking, or writing, in tradition, allegories, and parables.

Verse 4 – “And as he sowed, some seed fell by the wayside; and the birds came and devoured them.” The “wayside” would be an area where no plow had broken up the land. The soil would be hardened, giving no opportunity for the seed to enter.  Here is his interpretation in a later verse:

Matthew 13:18-19 “Therefore hear the parable of the sower: 19  When anyone hears the word of the kingdom, and does not understand it, then the wicked one comes and snatches away what was sown in his heart. This is he who received seed by the wayside.

This type of soil could be likened to someone who has absolutely no interest in the gospel. We often express this situation as “going in one ear and out the other.” In Matt 7:6 Jesus equates this to casting pearls before swine. (Pigs have no appreciation for the value of pearls!)

Verse 5 –  “Some fell on stony places,.. they immediately sprang up because they had no depth…”

Verse 6 – “But when the sun was up… they had no root they withered away.” In rocky soil the available growing surface is crowded out by the rocks. But when a seed in this soil receives adequate moisture, it should sprout. But the plant would have a difficult time growing roots under these conditions. Here is his interpretation in a later verse:

Matthew 13:20-21 But he who received the seed on stony places, this is he who hears the word and immediately receives it with joy; 21  yet he has no root in himself, but endures only for a while. For when tribulation or persecution arises because of the word, immediately he stumbles.

Verse 7 – “And some fell among thorns, and the thorns sprang up and choked them.”  The dirt may have been plowed here, but the weeds had not been removed or had been allowed to re-grow. Here is his interpretation in a later verse:

Matthew 13:22 Now he who received seed among the thorns is he who hears the word, and the cares of this world and the deceitfulness of riches choke the word, and he becomes unfruitful.

Verse 8 – “But others fell on good ground and yielded a crop: some a hundredfold, some sixty, some thirty.” “Good ground” is where the soil is deep, plowed and ready to receive the seed. Here is his interpretation in a later verse:

Matthew 13:23 23  But he who received seed on the good ground is he who hears the word and understands it, who indeed bears fruit and produces: some a hundredfold, some sixty, some thirty.”

Verse 9 – “He who has ears to hear, let him hear!” Why did the Jews, who were so familiar with parables and the scriptures, not understand him? God’s written word and Christ’s spoken word should lead one to salvation. 2Tim 3:15 “… Holy Scriptures, which are able to make you wise for salvation through faith which is in Christ Jesus.” But the majority of the Jews did not accept him. Here is what Zechariah said concerning the Jews:

Zechariah 7:11-14 “But they refused to heed, shrugged their shoulders, and stopped their ears so that they could not hear. 12  Yes, they made their hearts like flint, refusing to hear the law and the words which the LORD of hosts had sent by His Spirit through the former prophets. Thus great wrath came from the LORD of hosts. 13  Therefore it happened, that just as He proclaimed and they would not hear, so they called out and I would not listen,” says the LORD of hosts. 14  “But I scattered them with a whirlwind among all the nations which they had not known. Thus the land became desolate after them, so that no one passed through or returned; for they made the pleasant land desolate.”

Here is Jesus’ discussion about the reason for speaking in parables:

Matthew 13:10-17 And the disciples came and said to Him, “Why do You speak to them in parables?” 11  He answered and said to them, “Because it has been given to you to know the mysteries of the kingdom of heaven, but to them it has not been given. 12  For whoever has, to him more will be given, and he will have abundance; but whoever does not have, even what he has will be taken away from him. 13  Therefore I speak to them in parables, because seeing they do not see, and hearing they do not hear, nor do they understand. 14  And in them the prophecy of Isaiah is fulfilled, which says: ‘Hearing you will hear and shall not understand, And seeing you will see and not perceive; 15  For the hearts of this people have grown dull. Their ears are hard of hearing, And their eyes they have closed, Lest they should see with their eyes and hear with their ears, Lest they should understand with their hearts and turn, So that I should heal them.’ Isa 6:9-10 16  “But blessed are your eyes for they see, and your ears for they hear; 17  for assuredly, I say to you that many prophets and righteous men desired to see what you see, and did not see it, and to hear what you hear, and did not hear it.

Matthew 13:34-35
34  All these things Jesus spoke to the multitude in parables; and without a parable He did not speak to them,
35  that it might be fulfilled which was spoken by the prophet, saying: “I will open My mouth in parables; I will utter things kept secret from the foundation of the world.”

While this parable is most often called “The Parable of the Sower,” the real lesson can be found in the types of soils upon which the seed fell. The types of soils are likened to mankind’s hearts. Are they open to the seed of the word? Can they withstand weeds, sun, wind or all of the temptations and trials of this life and remain faithful to our Savior? 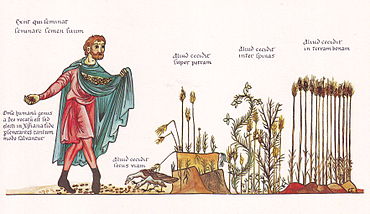