Matthew 18:23-35
23  Therefore the kingdom of heaven is like a certain king who wanted to settle accounts with his servants.
24  And when he had begun to settle accounts, one was brought to him who owed him ten thousand talents.
25  But as he was not able to pay, his master commanded that he be sold, with his wife and children and all that he had, and that payment be made.
26  The servant therefore fell down before him, saying, ‘Master, have patience with me, and I will pay you all.’
27  Then the master of that servant was moved with compassion, released him, and forgave him the debt.
28  But that servant went out and found one of his fellow servants who owed him a hundred denarii; and he laid hands on him and took him by the throat, saying, ‘Pay me what you owe!’
29  So his fellow servant fell down at his feet and begged him, saying, ‘Have patience with me, and I will pay you all.’
30  And he would not, but went and threw him into prison till he should pay the debt.
31  So when his fellow servants saw what had been done, they were very grieved, and came and told their master all that had been done.
32  Then his master, after he had called him, said to him, ‘You wicked servant! I forgave you all that debt because you begged me.
33  Should you not also have had compassion on your fellow servant, just as I had pity on you?’
34  And his master was angry, and delivered him to the torturers until he should pay all that was due to him.
35  So My heavenly Father also will do to you if each of you, from his heart, does not forgive his brother his trespasses.”

According to Matt 17:22, 24 Jesus was in Galilee at Capernaum when he spoke this parable.

Consider these facts about money and numbers in the first century:

Peter came to Jesus with a question concerning forgiveness among Jewish brethren.  Jesus expands Peter’s suggestion of seven times to a very large number of times.

Matthew 18:21-22 Then Peter came to Him and said, “Lord, how often shall my brother sin against me, and I forgive him? Up to seven times?” 22  Jesus said to him, “I do not say to you, up to seven times, but up to seventy times seven.

Once again Jesus uses the phrase “… Therefore the kingdom of heaven is like….” as an introduction to this parable in answer to Peter.  Christ was once again explaining to his disciples that God’s coming new kingdom would be different than the then current Law of Moses.  Under that old covenant, sins were not totally removed before God.

Sin and Forgiveness Under the Old Covenant

The Old Covenant Could Not Take Away Sin.

Hebrews 10:4 For it is not possible that the blood of bulls and goats could take away sins.

Hebrews 10:11  And every priest stands ministering daily and offering repeatedly the same sacrifices, which can never take away sins.

1 John 3:5  And you know that He was manifested to take away our sins, and in Him there is no sin. The purpose in Christ’s coming was to change from a covenant that could not take away sin to one that could take away sin.

Romans 11:27  For this is My covenant with them, When I take away their sins.”  This is quoted from the prophecy of Isa 59:20-21 concerning the time when it would happen.

The one exception – 2 Samuel 12:13  So David said to Nathan, “I have sinned against the LORD.” And Nathan said to David, “The LORD also has put away your sin; you shall not die.  This is the only verse that speaks of God “taking away” or “putting away” sin from an individual under the Law of Moses (the old covenant).  Apparently God made an exception for the sin of David in this case, because David was called (by God),“…a man after His own heart,…” 1 Samuel 13:14

Sins Were Remembered Under the Old Covenant.

Hebrews 10:3  But in those sacrifices there is a reminder of sins every year.

Hebrews 8:12  For I will be merciful to their unrighteousness, and their sins and their lawless deeds I will remember no more.”  The writer of Hebrews quotes the prophecy from Jer 31:31-34.

Hebrews 10:16-17  “This is the covenant that I will make with them after those days, says the LORD: I will put My laws into their hearts, and in their minds I will write them,”
17  then He adds, “Their sins and their lawless deeds I will remember no more.” The writer of Hebrews again quotes the prophecy from Jer:31-34.

Sin Is Actually Spoken of As Forgiven or Pardoned Under the Law of Moses.

Numbers 14:19-24  Pardon the iniquity of this people, I pray, according to the greatness of Your mercy, just as You have forgiven this people, from Egypt even until now.” 20  Then the LORD said: “I have pardoned, according to your word;…

2 Chronicles 7:14  if My people who are called by My name will humble themselves, and pray and seek My face, and turn from their wicked ways, then I will hear from heaven, and will forgive their sin and heal their land.

The Law of Moses Was Not Perfect (i.e. complete).

Hebrews 10:1 For the law, having a shadow of the good things to come, and not the very image of the things, can never with these same sacrifices, which they offer continually year by year, make those who approach perfect.

Hebrews 7:19  for the law made nothing perfect; on the other hand, there is the bringing in of a better hope, through which we draw near to God.

Hebrews 9:9 It was symbolic for the present time in which both gifts and sacrifices are offered which cannot make him who performed the service perfect in regard to the conscience– Yet the new covenant would make individuals perfect!  See John 17:23, Eph 4:13, Heb 12:22-23

God’s “instruction in righteousness” under the old covenant was not complete.  There was  something not yet revealed, not yet given.  Therefore, the Hebrews writer speaks of it as having a fault.

Hebrews 8:7 For if that first covenant had been faultless, then no place would have been sought for a second.

God did provide a “place” for the New Covenant.  It was in his eternal plan to prepare a people (by using the Law of Moses) to teach them prior to Messiah coming.

The Summation of the Parable

The true purpose of this parable is to reveal the great kindness of God in devising a plan to forgive and redeem mankind.  This great plan allowed God and man to once again have the spiritual relationship that existed in the Garden of Eden where God dwelt with man.  see Gen 3:8-10, Rev 21:3

I encourage each you to do your own word study of the Greek and Hebrew in these verses.  A study of this parable leads to many questions concerning forgiveness such as these:  Must the one needing forgiveness, ask for it first?  Does one loan money again to the forgiven one, to the extent of bankruptcy for the lender? 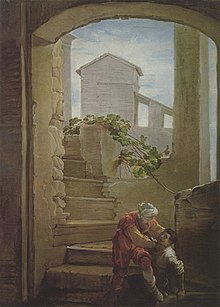