Matthew 5:14-16
14  You are the light of the world. A city that is set on a hill cannot be hidden.
15  Nor do they light a lamp and put it under a basket, but on a lampstand, and it gives light to all who are in the house.
16  Let your light so shine before men, that they may see your good works and glorify your Father in heaven.

Mark 4:21-22
21  Also He said to them, “Is a lamp brought to be put under a basket or under a bed? Is it not to be set on a lampstand?
22  For there is nothing hidden which will not be revealed, nor has anything been kept secret but that it should come to light.

Luke 8:16-18
16  “No one, when he has lit a lamp, covers it with a vessel or puts it under a bed, but sets it on a lampstand, that those who enter may see the light.
17  For nothing is secret that will not be revealed, nor anything hidden that will not be known and come to light.
18  Therefore take heed how you hear. For whoever has, to him more will be given; and whoever does not have, even what he seems to have will be taken from him.”

Luke 11:33-36
33  “No one, when he has lit a lamp, puts it in a secret place or under a basket, but on a lampstand, that those who come in may see the light.
34  The lamp of the body is the eye. Therefore, when your eye is good, your whole body also is full of light. But when your eye is bad, your body also is full of darkness.
35  Therefore take heed that the light which is in you is not darkness.
36  If then your whole body is full of light, having no part dark, the whole body will be full of light, as when the bright shining of a lamp gives you light.”

Let us first deal with some translation problems in these verses.  Some translations have “candle” instead of the then existent “oil lamps” of the first century.  Some translations have “bushel” which is of Latin origin and is considered a dry measure of about an English peck.  The correct translation of G3426 μόδιος modios may actually be a generic “basket” and not an exact measure.  This is shown by the use of a different word; “vessel” in Luke 8:16 G4632 σκεῦος skeuos.  Regardless of those two problems, the lesson of the parable still comes through.

In the context and setting of Matt chapter 5, I think the primary likeness of the light of the lamp is the “message” that Jesus came to bring to the Jews.  By extension, that message was to be later given to Gentiles also.  However, if one carefully analyzes the points of his discussion, the subjects deal with previously delivered Jewish teachings.  In some cases, the previous teaching seem to come from the Scribes’ Pharisees’ and Sadducees’ interpretations of the law of Moses.  Matt 23:2-5

In the reading found in Mark 4:21, notice the action of bringing a lamp into a room.  “Is a lamp brought to be put under a basket or under a bed?  This slight difference implies that someone is carrying a light into a location.  This is exactly what Jesus was doing by his coming “… to the lost sheep of the house of Israel.” Matt 15:24.  Yet, he passes the responsibility to them, and to all who follow after him; Matt 5:14 You are the light of the world. A city that is set on a hill cannot be hidden.

John 3:19-21
19  And this is the condemnation, that the light has come into the world, and men loved darkness rather than light, because their deeds were evil.
20  For everyone practicing evil hates the light and does not come to the light, lest his deeds should be exposed.
21  But he who does the truth comes to the light, that his deeds may be clearly seen, that they have been done in God.”

Look again in Mark’s account.  It was to be hidden only for a time because the unbelieving Jews who hardened their hearts through evil deeds, dwelt in darkness.  What had been hidden from them?  It was Christ’s identity as the Messiah, that the unbelieving Jews of His day just would not accept.

Mark 4:22
22  For there is nothing hidden which will not be revealed, nor has anything been kept secret but that it should come to light.

Eph 3:5
“… the mystery…” 5 which in other ages was not made known to the sons of men, as it has now been revealed by the Spirit to His holy apostles and prophets:

Col 1:26
26  the mystery which has been hidden from ages and from generations, but now has been revealed to His saints.

1 John 1:5
5  This is the message which we have heard from Him and declare to you, that God is light and in Him is no darkness at all.

1 John 3:2
2  Beloved, now we are children of God; and it has not yet been revealed what we shall be, but we know that when He is revealed, we shall be like Him, for we shall see Him as He is.

2 Thess 1:7
7  and to give you who are troubled rest with us when the Lord Jesus is revealed from heaven with His mighty angels,

Like the other parables of the “leaven” and the “seed”, the “light” is intended to grow.  It’s about visibility!

When the Jewish system was totally destroyed, Christ was revealed as having come to fulfill the law, and change the covenant with God’s people.  I conclude with these thoughts: 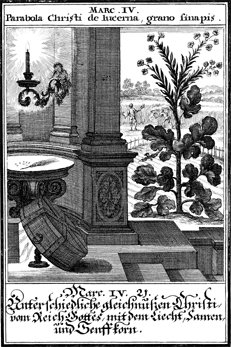