Some later translations have “speck and plank” as found in the NKJV. Just after naming his Apostles in Luke 6:14,15 a large crowd gathered around him in a level place and he began to speak to them. While speaking to them he told the parable of the Mote and Beam.

Luke 6:37-43
37 “Judge not, and you shall not be judged. Condemn not, and you shall not be condemned. Forgive, and you will be forgiven. 38 Give, and it will be given to you: good measure, pressed down, shaken together, and running over will be put into your bosom. For with the same measure that you use, it will be measured back to you.” 39 And He spoke a parable to them: “Can the blind lead the blind? Will they not both fall into the ditch? 40 A disciple is not above his teacher, but everyone who is perfectly trained will be like his teacher. 41 And why do you look at the speck in your brother’s eye, but do not perceive the plank in your own eye? 42 Or how can you say to your brother, ‘Brother, let me remove the speck that is in your eye,’ when you yourself do not see the plank that is in your own eye? Hypocrite! First remove the plank from your own eye, and then you will see clearly to remove the speck that is in your brother’s eye.

There is some evidence that the proverb of the Mote and Beam was familiar to both Arabs and Jews at this time. Yet Jesus embellishes it with extra admonitions for the attitude and type of life that his own disciples should have. We generally have considered it as a lesson on humility and self examination before correcting or condemning others. But, lets go through the passage verse by verse.

Verse 37 – This verse deals with interaction between individuals. However, it also applies to an individual’s action toward a group. Each of the separate phrases deal with action and reaction and caution one concerning the initial action. The reaction is by either the individual/group receiving the initial action (condemnation), or ultimately by God! The first phrase brings up the question of; what can be judged by man? For more information on judging, go here: JUDGE as used in the New Testament There are 5 Greek words, plus one root word, that are translated as Judge in our New Testament. They range in strength from a simple decision, to a final judgment by God himself.

Accusations against others are often an attempt to lower the position of another person/group so that oneself can be deemed higher. If the attitude of superiority is strong, the accuser may actually want the person or group punished or annihilated. Such actions can indicate a spirit of revenge or jealousy, or at least a lack of mercy. However, this should all be balanced with an understanding of how we should deal with known, proven, enemies of God.

Verse 38 – These are the attitudes that Christ’s disciples should have; generosity, humility, fairness, forgiveness, and loving kindness. If one has these attributes he will be greatly rewarded! One earth, we must find a way to live in some measure of unity and peace or we will devolve into envy, strife, and wars. This is also true in congregations. If Christians don’t have “the Mind of Christ,” they too will devolve into chaos and splits.  Rom 1:28-31, 1Tim 6:3-5 1Cor 1:12,13

Verse 39 – This was a known general proverb that Christ used here. If there were Pharisees within the large crowd, Christ could have been aiming this condemnation at them. The Pharisees were often the target of his rebukes because they were very much filled with their own self-righteousness. They could not see the true Messiah standing right in front of them! They considered themselves great teachers of The Law, yet Christ was saying that one can not teach to others what he does not understand. John 9:35-41. This was very much true of the Pharisees because they didn’t accept the Truth. John 14:6 (Jesus IS the Truth.)

Verse 40 –  The Bible use of perfect is equivalent of our word complete. We have studied in recent lessons the true meaning of perfect/complete. A little knowledge can sometimes cause one to believe that he has more knowledge or ability that he actually has. You may have seen this in a work situation where a trainee gets ahead of himself and tries to correct or instruct others before he fully understands his own job.

Verse 41 –  Humans have inclination to reprove and correct others while not seeing our own faults. We are visual creatures – we observe events and actions caused by others that happen before us. We then judge how these events and actions should be corrected, often not considering our own actions. Such was the case when Nathan came before David and told him of his sin with Bathsheba. 2Sam 12:1-14

The hypocrite is one who professes to be what he is not. Neither the Pharisees, nor his own disciples were immune from this. We today, still have the same problem with us. 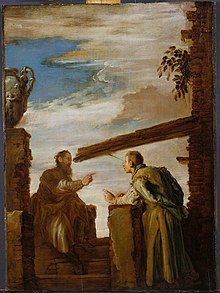 The Mote and Beam  1619 painting by Domenico Fetti