Luke 7:36-50 (NKJV)
36  Then one of the Pharisees asked Him to eat with him. And He went to the Pharisee’s house, and sat down to eat. 37  And behold, a woman in the city who was a sinner, when she knew that Jesus sat at the table in the Pharisee’s house, brought an alabaster flask of fragrant oil, 38  and stood at His feet behind Him weeping; and she began to wash His feet with her tears, and wiped them with the hair of her head; and she kissed His feet and anointed them with the fragrant oil. 39  Now when the Pharisee who had invited Him saw this, he spoke to himself, saying, “This man, if He were a prophet, would know who and what manner of woman this is who is touching Him, for she is a sinner.” 40  And Jesus answered and said to him, “Simon, I have something to say to you.” So he said, “Teacher, say it.”

41  “There was a certain creditor who had two debtors. One owed five hundred denarii, and the other fifty. 42  And when they had nothing with which to repay, he freely forgave them both. Tell Me, therefore, which of them will love him more?” 43  Simon answered and said, “I suppose the one whom he forgave more.” And He said to him, “You have rightly judged.”

44  Then He turned to the woman and said to Simon, “Do you see this woman? I entered your house; you gave Me no water for My feet, but she has washed My feet with her tears and wiped them with the hair of her head. 45  You gave Me no kiss, but this woman has not ceased to kiss My feet since the time I came in. 46  You did not anoint My head with oil, but this woman has anointed My feet with fragrant oil. 47  Therefore I say to you, her sins, which are many, are forgiven, for she loved much. But to whom little is forgiven, the same loves little.” 48  Then He said to her, “Your sins are forgiven.” 49  And those who sat at the table with Him began to say to themselves, “Who is this who even forgives sins?” 50  Then He said to the woman, “Your faith has saved you. Go in peace.”

Verse 36 “One of the Pharisees“ – His name was Simon (v40). This parable does not appear to be another attack on the Pharisees, but rather a lesson for Simon and all other disciples.

Verse 37 “a woman in the city who was a sinner“ Many suggest that the woman was a known prostitute. In that day it was very difficult for a woman to make a living alone. Maybe she was a prostitute, or maybe even one who was sold into sexual slavery. While she was considered a “sinner” from the city, she was at least a disciple of Christ. But if she was an un-repentant prostitute, her presence in a Pharisee’s house would have been considered a ritual impurity. There is much discussion about the meaning of “sinner” in this verse among commentators. It was often used of any the Pharisees condemned, but also of any Gentile. So, we really don’t know for sure what her sin was. We do know that  she valued the Savior highly and openly demonstrated her faith in him.

Verse 38 “stood at His feet behind Him weeping”   Christ allowed her to touch him, washing his feet with her tears, kissing his feet and anointing them with the costly oil. The kissing and anointing were considered a show of love, supplication and subjection.

Verse 39 At this point, Simon is thinking to himself that a true prophet should know the woman was a sinner, and as a Jew, he should not allow her to touch him! He must have really been sorry he invited Jesus into his home.

Verse 40 Jesus, being a true prophet and knowing Simon’s thoughts, asks if he can speak to him about the woman.

Verses 41, 42 Jesus gives the parable and asks Simon a question: Tell Me, therefore, which of them will love him more?”

Verse 43 Simon’s answer rightly affirms the principle of the parable that the one with the greater debt should be more grateful when that debt is forgiven. But the whole of the parable is also about Jesus teaching forgiveness. The forgiveness that God gives changes the relationship of that person before God. It should also change how mankind perceives God’s disciples.

Verses 44-47 Here we see that Jesus was indeed a prophet, which Simon had doubted, because he saw into Simon’s thoughts. He rehearsed what Simon had not done by showing what she had done. Simon had not done even the common Jewish customs when Jesus came into his house. Whether this was purposeful or not, we are not told. Maybe Simon was just curious about Jesus and not an avid disciple. Because of the woman’s actions displaying her faith Jesus then says:  “her sins, … are forgiven, for she loved much.”

Verses 48-50 Then, turning to the woman: 48  Then He said to her, “Your sins are forgiven.” 49  And those who sat at the table with Him began to say to themselves, “Who is this who even forgives sins?” 50  Then He said to the woman, “Your faith has saved you. Go in peace.” The other Jewish guests questioned his authority to forgive sins. This was nothing like the process of forgiveness required under the Law of Moses that they had lived under for so long. It was shocking to them that a man would presume to pronounce forgiveness based on faith shown by kind acts.

When we speak about forgiveness after Pentecost, we often go to this verse:

Col 2:14 (NKJV) having wiped out the handwriting of requirements that was against us, which was contrary to us. And He has taken it out of the way, having nailed it to the cross.

At first reading of this translation it seems to be speaking about the Law of Moses. However, when we check different translations, we can see that interpretation may not be correct. Notice the different readings.

New International Version
“… having canceled the charge of our legal indebtedness, which stood against us and condemned us; he has taken it away, nailing it to the cross.”

English Standard Version
“… by canceling the record of debt that stood against us with its legal demands. This he set aside, nailing it to the cross.”

New American Standard Bible
“… having canceled out the certificate of debt consisting of decrees against us, which was hostile to us; and He has taken it out of the way, having nailed it to the cross.”

NET Bible
“… He has destroyed what was against us, a certificate of indebtedness expressed in decrees opposed to us. He has taken it away by nailing it to the cross.”

These versions liken the process to a common legal practice of writing a note or certificate for a debt. The debt holder would hold the certificate until the debt was paid, or out of the goodness of his heart, he could forgive/cancel the debt. These versions more clearly show the general sin/debt that all men everywhere, from Adam onward, owe to God. It is not speaking only about the Law of Moses, because any violation of any command of God separates all mankind from God. Isa 59:2 “…But your iniquities have separated you from your God;…” In this parable we can see that Simon did not yet understand what the Savior was sent to do. In Matt 15:24 we see that Christ was sent only “… to the lost sheep of the house of Israel.” But Christ was also sent to reconcile all mankind to God, both Jews and Gentiles because both groups were guilty of sin and owed a debt to God.

Rom 1:16 “For I am not ashamed of the gospel of Christ, for it is the power of God to salvation for everyone who believes, for the Jew first and also for the Greek.”

The parable shows that even the most vile of sinners, whether Jew or Gentile, can be forgiven by faith in Jesus the Christ. 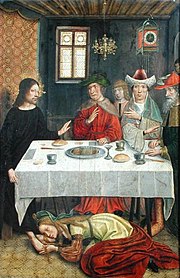 The Meal at the House of Simon the Pharisee, c. 15th century.